More than 25 000 pupils in 50primary and high schools situated in rural KwaZulu-Natal will be educated about the devastating effects of pollution in the oceans on marine life through an interactive presentation hosted by Steven Ngubane of Aqua Amazing,sponsorsedby Plastics|SA, Ezemvelo KZN Wildlife and Umgeni Water. 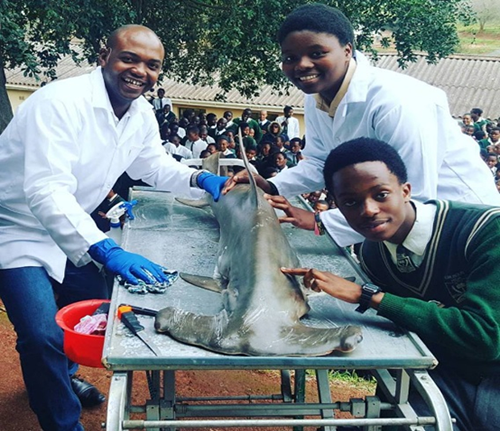 Above: Steven Ngubane of Aqua Amazing with students of the Hlahlindlela High School in KZN

According to Douw Steyn, Sustainability Director at Plastics|SA, this schools programme forms part of the annual Clean-Up & Recycle SA activities that take place throughout the month of September. These activities culminate in national Recycling Day on Friday, 16 September, and end by celebrating South Africa’s 20th anniversary of participating in the annual International Coastal Clean-Up on Saturday, 17 September.
“The ocean remains one of the most expansive, mysterious and diverse places on Earth. Unfortunately, it is being threatened by pollution from people and industry on land and from natural causes. Marine life is dying and the whole oceanic ecosystem is threatened by various sources of pollution. If we are to preserve the ocean and its natural beauty, drastic measures will have to be taken to combat this scourge,” Steyn says.
Although many of the children being targeted with this school’s campaign have never even seen the beach, it is important for them to realise that they too have an impact on the health of our oceans.  Aqua Amazing teaches the children that their land based litter ends up in rivers, and eventually the oceans, and that they therefore have a responsibility to clean-up and recycle their plastics.
“Plastic debris is one of the most common elements found in the ocean. This poses a significant threat to marine life as a whole.  Our interactive talks and presentations use graphic shark dissections to present the children with amazing facts and figures about the impact of marine litter and waste found in oceans on sharks, marine conservation and marine science matters,” Ngubane says.
The first school to benefit from the launch of this pilot project that took place last week were the 900 pupils ofHlahlindlela High School, situated in the hills of Waterfall, KZN. In his talk, Ngubane educated the learners on the various sharks found along our coastline and dispelled many myths about sharks. He also highlighted the importance and the many opportunities to be found in waste and recycling.
“Remember that your land based litter ends up in rivers and ultimately in the oceans where it becomes a potential hazard for living creatures,” he warned.  Pupils were also educated about Plastics|SA’svarious sustainability initiatives and encouraged to take part in this year’s Clean-up and Recycle Competition.
Addressing the pupils at Hlahlindlela High School after the presentation, school principal Mr Masango said: “The knowledge that you have gained today is worth nothing if you do not share it with your family and community.  Now go out and SHARE!’