Frankfurt am Main, 29 May 2013. – In the first quarter of 2013, order bookings in Germany’s machine tool industry fell by 19 per cent compared to the equivalent quarter of 2012. Domestic orders were down by 21 per cent, while orders from abroad dropped by 18 per cent.

“Demand for machine tools is still lacking momentum”, comments Dr. Wilfried Schäfer, Executive Director of the industry association VDW (German Machine Tool Builders’ Association) in Frankfurt am Main. The weak start to the year, he said, signals a perceptible degree of scepticism, not least by mid-tier customers in Germany. Order bookings in metal-cutting applications, for instance, with a broadly diversified customer base, remained 26 per cent down on the preceding year’s figure. In forming technology, by contrast, which is dominated by project business with the automotive industry, orders are still running at the previous year’s level.

“The year’s second half now has to provide a counterweight, if the predicted growth in production output of one per cent is not to be put at risk”, comments Schäfer. Expectations here are once again focused on the expanding markets of Asia. In China, particularly, by far the biggest market for the German machine tool industry, faster economic growth is again being forecast. North America, most recently a vital support for the sector, will remain a stable market this year as well. Russia, finally, thanks to its substantial need for modernisation in its domestic industrial sector, likewise continues to be an attractive customer.

There are also rays of hope from the international automotive industry, which is deploying strategic investments in the battle for market shares, and from the aircraft industry and the mechanical engineering sector. All of them intend to be making above-average capital investments in 2013. There will be a good opportunity for this at the EMO Hannover 2013, where the international world of metalworking will be meeting up from 16 to 21 September, showcasing to the planet’s users of machine tools the latest innovations in the field of production technology, providing them with the best possible basis for their ongoing investment decisions.

Background
The German machine tool industry ranks among the five largest sectors in the country’s mechanical engineering segment. It supplies production technologies for metalworking applications to all categories of manufacturer, and makes a crucial contribution towards progressing innovation and productivity in the industrial sector overall. Due to its absolutely key position for industrial production output, its development is also an important indicator for the economic vigour of the country’s industrial sector as a whole. In 2012, the German machine tool industry produced machines and services worth around 13 billion euros, and was employing 70,900 people (status: December 2012, firms with more than 20 staff). This corresponded to growth of 10 per cent. 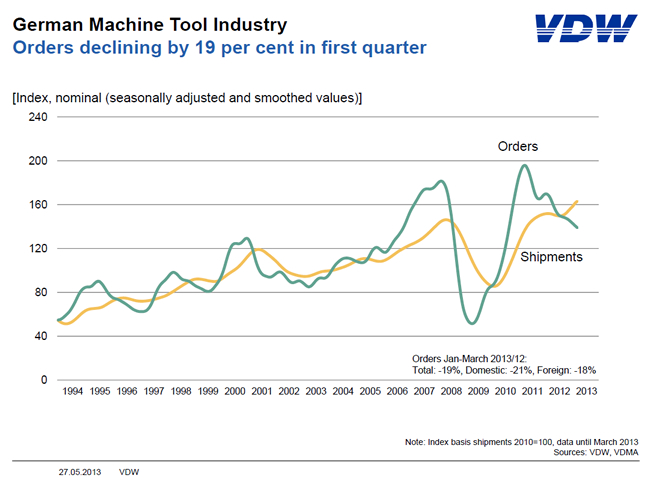