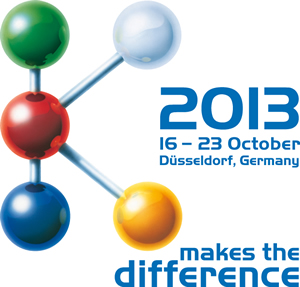 It was with great expectations that companies from the plastics and rubber industries came to Düsseldorf, to the world’s most important trade fair in their sector, K 2013. The upturn experienced in the sector for months now along with the confidence of its companies to be able to showcase pioneering product innovations for all sections of the value added chain raised justified hopes of a good fair and brisk post-fair business. And these expectations were actually even exceeded over the eight days of the trade fair. Exhibitors reported unanimously on numerous concrete project enquiries, intense negotiations with trade visitors from throughout the world and a remarkable number of business deals, some of which were concluded instantaneously and quite a number of which were worth millions.

Chairman of the Exhibitors’ Advisory Board for K 2013 Ulrich Reifenhäuser was extremely pleased with the results: “We had not expected visitors’ willingness to invest to be this high! The many innovative products and applications premiered in Düsseldorf met with great interest from trade visitors. And the innovations were not just admired as many, very concrete negotiations were held and contracts were signed. Many customers are extending their capacities and are investing in new technologies to sharpen their global competitive edge. We very confidently anticipate strong post-fair business and expect continuing growth in our sector.”

This view was echoed throughout all areas of the fair and shared by the over 3,200 exhibiting raw material producers, processors and machinery producers to an equal extent. Exhibitors particularly highlighted the now even wider international spread of visitors and their great specialist expertise plus the fact that a disproportionately high number of top managers had made the journey to Düsseldorf.

The some 218,000 trade visitors to K 2013 came from well over 120 countries. Werner Matthias Dornscheidt, President & CEO of Messe Düsseldorf, delighted along with his team at the excellent response: “Once again it becomes very clear that K is and remains the most important event in the rubber and plastics industry! This is where new technologies are premiered alongside fully matured further developments and this is also where orders are placed for these innovations. Foreign visitors to K 2013, in particular, showed an extremely high willingness to invest and one in two visitors came to Düsseldorf with specific purchasing intentions in mind. Even if the size of delegations from the individual purchasing companies dropped slightly, no firm producing or using plastic goods missed this chance to find out about the innovations of today and the trends of the future at K 2013.”

Results from the visitor survey also underpin this view held by exhibitors that the international flair of visitors has risen once again: 58%, i.e. 126,000 trade visitors, came from abroad. Just under half of all foreign visitors came from overseas – travelling to Düsseldorf from as far away as Angola, Burkina Faso, the Falkland Islands, the Yemen, Malawi, Nepal, New Caledonia, Oman, Peru and Turkmenistan. As expected, the proportion of trade visitors from Asia accounted for the largest group of foreign visitors – some 30,000 specialists came to the Rhineland from South, East and Central Asia as well as from the Near and Middle East. Visitors from India were once again the largest group here while the number of trade visitors from China, Indonesia, Iran, Japan and Taiwan rose considerably.

Also posting a significant plus was the proportion of visitors from North America: some 8,100 visitors were registered from the USA and Canada – 1,300 more than at K 2010. Some 11,000 specialists came from Latin America, i.e. about as many as came three years ago. Forming the largest contingent were experts from Brazil, Mexico, Argentina and Colombia.

Another gratifying increase was also noted in the number of visitors from South Africa with some 2,000 hailing from there.

Amongst visitors from neighbouring European countries the Netherlands dominated with 8,000 visitors followed by France, Belgium, Great Britain and Italy. There was also a noticeable rise in interest from Poland, the Czech Republic and Hungary.

Across all national borders there was a disproportionately high number of managers amongst trade visitors: about two-thirds came from top or middle management. Well over half played a decisive or co-determining role in their companies’ investment decisions. The proportion of visitors from research, development and design was also considerable.

Solutions for saving resources and energy efficiency dominate many product launches and the sector is marked by a desire to manufacture products in an environmentally friendly yet cost-effective way. Machinery and plant construction, the largest exhibiting sector at K 2013 with some 1,900 exhibitors, was also at the focus of visitor interest: just under two-thirds of all visitors polled said they particularly wished to gather information on the innovations in this sector. For 42% of trade visitors the presentations of raw and ancillary material producers were of prime interest while 22% mainly directed their attention to semi-finished goods and technical components made of rubber and plastic (multiple responses possible). Visitors came from all key user sectors – from the building industry and vehicle construction, packaging as well as electrical and medical engineering through to agriculture. Overall, visitors to K 2013 gave their best grades to the range on show in the 19 halls of the exhibition centre: 96% affirmed that they had fully achieved the goals of their visit.

Special Show “Kunststoff bewegt – Plastics move the World”
Also meeting with great interest amongst trade visitors from throughout the world was the K 2013 special show entitled “Kunststoff bewegt – Plastics move the World”. This show highlighted the contribution made by plastics to a “life in movement”. The aim here was to address the direct contribution of plastics to the varied facets of mobility as well as emotional movement – for instance, by way of art and design. Future-oriented issues revolving around the major themes of population growth, energy needs and climate change were also discussed. The stand opening on 16 October saw Germany’s former Foreign Minister Joschka Fischer discuss the issue of sustainability.