Johannesburg,November 2, 2017. Since 2013, more than $94-million (ZAR1.258 billion) in capital investments have been made by industry heavyweights such as ABInbev, Coca-Cola Southern Africa, Nampak Bevcan and Hulamin to convert the beverage can industry from steel to aluminium.

Not only did this step bring the region in line with other major markets such as the United States - which changed to aluminium cans in the 1970s and 1980s – but it also had a major, positive impact on the industry’s recycling statistics.

According to MetPac-SA, the industry body representing the interests of the local metal packaging industry, the recycling rate for used beverage cans in South Africa grew significantly from only 18 % in 1993 to its present rate of around 72%.  The organisation’s CEO, Delanie Bezuidenhout, believes that South Africa’s conversion to aluminium played an important role in increasing recycling volumes because aluminium beverage cans are infinitely recyclable without loss of strength or quality, and offer collectors an attractive rate.

“This makes aluminium recovery and recycling an economically-viable option for beverage can collectors in the informal sector.  Millions of Rands flows into the scrap metals and recycling industry each year, allowing an additional 2 000 to 3 000 people to earn a living or to supplement low incomes,” Bezuidenhout says.

With a long tradition of continuous improvement and business excellence, Nampak Bevcan has become a preferred beverage can manufacturer in sub-Saharan Africa. With manufacturing plants located in Johannesburg, Pretoria, Cape Town, Angola and Nigeria, Nampak Bevcan commissioned South Africa’s first aluminium beverage can production line at its Springs plant.  By end-2014, all of their Gauteng can production lines were being converted to aluminium cans, completing the transition from steel to aluminium cans in just a few years. Initially only two aluminium lines were running, but soon all three lines were operational to meet the demand – allowing the company to produce eight can sizes at maximum speeds of up to 3 000 cans/minute, compared to 1 600 cans/minute on the old tinplate lines. 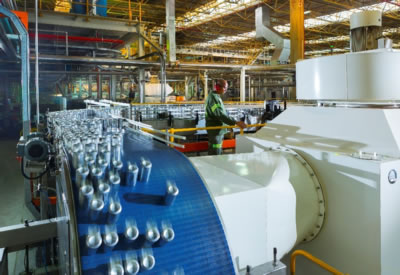 The full-scale plant is regarded as one of the biggest aluminium can manufacturing facilities in the world”, says Erik Smuts, Nampak's Group Executive for Bevcan.

Smuts lists the environmental advantages of this conversion process as up to 17% less energy is used in the manufacturing process because, amongst other savings, no external white coating is required, which in turn has reduced the number of ovens needed.

“A melting point of 660°C compared to more than 1 300°C for steel to process and recycle aluminium plus around a 60% weight reduction, which helps to minimise material and transportation costs, results in a significantly improved carbon footprint,” he states. “Thanks to system advances, we’re are also achieving significantly enhanced print quality on aluminium cans at high speeds.”

Hulamin is the sole South African company capable of manufacturing the aluminium sheet that Nampak requires. In past years, almost 95% of Hulamin’s aluminium came in the form of virgin aluminium ingots from BHP Billiton’s Hillside smelter in Richards Bay, KwaZulu-Natal. However, because it takes about 20 times more energy to convert mined bauxite into aluminium than it does to re-melt a used beverage can, Hulamin invested heavily in its recycling operations to take advantage of this energy and production cost savings.

“Looking at the Brazilian market, which leads global can recycling with a recovery rate of 97.9%, we believe that South Africa can achieve the same successes.  In Brazil, no cans go to landfill and the collectors are the most important pillar for this process.   To this end, we are working hard on aligning industry roleplayers with our vision to ensure that collectors benefit from an efficient and transparent market. We want to streamline the recycling of aluminium cans in order to ensure that more of the metal’s value will be passed through to collectors. It’s in all of our interests to have as high a recycling rate as possible,” Delanie concludes.