South Africa beats European recycling rate, but more can be done to grow the industry

Plastics recycling in South Africa has continued to grow

Johannesburg, Tuesday, 24 July 2018.Plastics|SA, the umbrella body representing the entire value chain of the local plastics industry, has just released the plastics recycling figures for the year ending 2017. For the seventh year running, plastics recycling in South Africa has continued to grow, with more than 334 727 tons recycled back into raw material. This gives South Africa an input recycling rate of 43.7 % - well above that of Europe’s recycling rate that currently sits at 31.1 %.

Commenting on South Africa’s latest recycling figures and how it compares with the rest of the world, Plastics|SA Executive Director, Anton Hanekom says: “South Africa is doing phenomenally well with its recycling, and I believe the latest results show that we are slowly but steadily beating the odds”.

Hanekom goes on to explain that the South African recycling industry is based on economic principles whereas in Europe, recycling is an environmental principle subscribed to by most citizens and local councils. “In South Africa, recycling needs to be financially viable in order to succeed, whereas in Europe it is the right thing to do. Locally we rely on manual labour to sort the waste and recycle, whilst overseas the entire process has become mechanised. Furthermore, there are landfill restrictions in place for recyclable and recoverable waste in some of the EU-28 countries, whilst in South Africa we only have formal waste management for 64 % of all households. More than 12 % of Metropolitan households do not even have regular refuse removal, much less a two-bin waste collection system where recyclables are collected separately on a weekly basis,” he states.

“One of the biggest challenges to building our recycling industry over the years, has been getting access to good quality, relatively clean materials before they reach landfills. Despite our calls for separation-at-source, whereby recyclable materials are separated from non-recyclables, a staggering 74% of the plastics that were recycled during 2017was still obtained from landfill and other post-consumer sources. In the European community, local government and the plastics industry are all involved in getting the recyclables out of the waste stream as early as possible. It is a sad reality that in South Africa, recyclables are still being sourced from landfill at high cost and danger to the waste pickers,” Hanekom says. He adds that landfill material is oftenpoor quality, contaminated and expensive to recycle.

Boosting job creation and the economy

Plastics recycling continued to provide an income to more than 58 100 workers in 2017. This figure includes self-employed waste pickers, employees of smaller entrepreneurial collectors and formal jobs in the recycling factories. Increased tonnages per employee were achieved and reached 53.8 tons – 7% more than in 2016. Through the procurement of recyclables, an estimated R 448 million was injected into the economy at primary sourcing level.

The most popular plastics to recycle in SA

The most widely recycled material in South Africa continues to be Low-Density Polyethylene (PE-LD and PE-LLD) packaging films. This is the most common plastic, with around 80 million tonnes being produced annually around the world, and is primarily used in packaging such as plastic bags, plastic films, wrappings, geomembranes, rotational moulded tanks, etc.

“Despite the challenges experienced in the end markets for these recycled materials and the growing opposition to single use plastics made of PE-LD, this was the most widely recycled plastic material in 2017. The barrier to entry is very low as most collectors can identify PE-LD films and markets are well established, although not necessarily growing,” Hanekom said.

PET beverage bottles continued to show a steady increase over the last 4 years. The drought in the Western Cape caused a spike in the sales of mineral water, which put more PET water bottles in the recycling stream and simultaneously created a growing demand for recycled content PET bottles to relieve the pressure on the limited virgin supply.

Products made from High-density polyethylene(PE-HD) suchasbottles, drums and crates were the third largest recycled polymer, and the demand for milk bottles increased during 2017. The Polypropylene (PP) tonnages also showed some growth, with the recycling of PP film being included with the well-established woven tapes, packaging items and domestic ware.

The recycling of flexible PVCproducts, such as gumboots, hoses and cable sheathing remain steady in South Africa, whilst the recycling of redundant water- and plumbing pipes, conduiting and gutters made from rigid PVC add to the recycling figures. 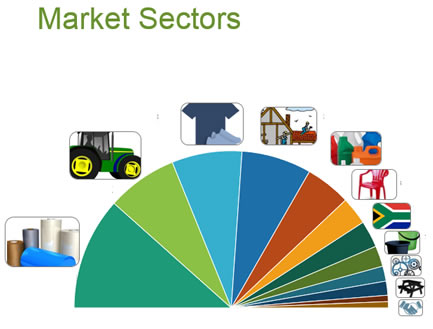 Whilst the recycling rates of plastics tell an impressive story, local recyclers often faced an uphill battle when it came to selling their material. “For the second year in a row, the recyclers had more recyclate than was required by their immediate and existing customers.

This makes it hard for them to survive and continue their operations, as they are unable to sell their stock. For this reason, developing suitable end-markets has become critical for the sustainability of the plastics recycling industry,” Hanekom warns.

Plastics raw materials are becoming scarcer as the population increases. Humankind has to deal responsibly with its resources. For this reason, recycling has become an essential activity. Moreover, the relevance of recycling is becoming more prominent as the image of plastics and the drive to create a long-term, circular economy demand end-of-life solutions for plastics packaging and plastics in general.

The momentum lies with four stakeholder groups: Consumers, Brand Owners and Retailers, Innovative Solutions and the Plastics Industry. Together with the three levels of Government, new end-markets need to be developed. At the same time, technology needs to be sourced that makes recycling energy efficient and consistent and ensures reliable quality levels. Recyclables should be recognised as the valuable resources that they are, and should be removed from the solid waste stream before reaching landfill. All stakeholders have to work together to make plastics the material of choice, to manufacture locally, process it efficiently and to manage the end-of-life products in the most efficient manner that will benefit the consumer, the industry and the planet, utilising all of the excellent characteristics of plastics. By embracing recycling as a way of life, I believe we can bring about a change in attitudes and mind-sets, even elevating plastics to becomethe environmental hero,” Hanekom concludes.