Polyvinyl chloride (PVC) is, besides polypropylene and polyethylene, one of the most widely produced plastics. 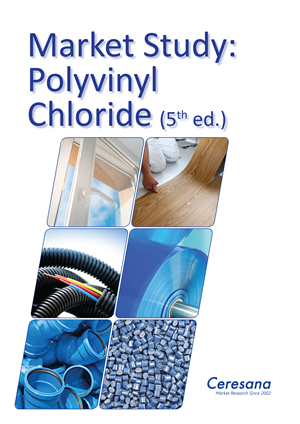 Polyvinyl chloride (PVC) is, besides polypropylene and polyethylene, one of the most widely produced plastics. The market research company Ceresana expects total demand for PVC to increase to about 56.2 million tonnes until 2026. A distinction is made between rigid PVC (rigid PVC-U = unplasticized), which is used, for example, for packaging, pipes, and window profiles, and flexible PVC (flexible PVC-P = plasticized), which contains up to 40% plasticizer. PVC-U accounts for approximately two thirds of total demand.

The most important PVC products in 2018 were pipes and conduits with a market share of over 37.2%. Profiles (share: 19.9%) and films and sheets (share: 18.3%) follow at a distance. Other products accounting for noteworthy shares of PVC demand are cables, flooring, and containers. Other industrial applications include coatings, medical products such as infusion bags as well as shoes.

The material PVC offers significant advantages for the production of sewage pipes. Compared to pipes made of concrete or metal, the weight of the units to be laid is drastically reduced. It is a decisive advantage for sewage pipes if they are resistant to corrosion. PVC is very resistant to many of these chemicals. The shape of PVC pipes becomes more and more variable as well. Non-circular pipes, for example, are suitable for relining old municipal drainage pipelines which often have non-circular shapes. In 2018, more than 7 million tonnes of PVC were used worldwide for the production of sewage pipes.

With a share of 62%, the construction industry will be the most important customer for PVC producers also in 2026. Examples for the use in the construction industry are: films, cables, tubes, profiles and coverings, sheets and pipes, dowels, screws, mounting elements, and coatings. The packaging industry will rank second with almost 16%, using PVC for flexible and rigid packaging. The most important application areas in this sector are packaging films, bags and sacks as well as shrink and stretch films. The rigid packaging segment includes containers such as butter and margarine tubs, yogurt cups, bottles, boxes as well as caps.