The plastics industry, through the Plastics Convertors Association of SA (PCASA) and the National Employers' Association of South Africa (NEASA) and four other employer’s organisations condemn this strike as Industrial Relations Fraud. 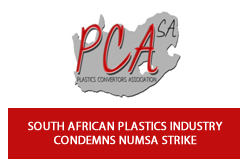 Johannesburg, 17 October 2018.
The South African plastics industry has condemned the latest strike action by members of the National Union of Metalworkers of South Africa (NUMSA), who has called on its members to join industrial action for a total National #PlasticsShutdown on Monday. The plastics industry, through the Plastics Convertors Association of SA (PCASA) and the National Employers' Association of South Africa (NEASA) and four other employer’s organisations condemn this strike as Industrial Relations Fraud. “This week’s strikes and picketing are therefore completely illegal and we condemn it in the strongest possible terms,” said Johan Pieterse, CEO of PCASA. The National Union of Metalworkers of South Africa (NUMSA) issued a press statement regarding the upcoming strike in the Plastics Industry on 11 October 2018. The document outlines various contentious matters between NUMSA and the employer bodies in the Plastics Industry. NUMSA is demanding that plastics employers should be covered by the same Metal and Engineering Industries Bargaining Council (MEIBC) main collective agreement that applies to those employers in the engineering sector. Although NUMSA states that there is no factual dispute between these groupings, NUMSA alleges that the employer bodies in the Plastics Industry including the Plastics Convertors Association of South Africa (PCASA are deliberately misleading NUMSA's members by, inter alia, intimidating NUMSA members by misconstruing the facts. NUMSA further alleges that "The employer group we are dealing with in the plastic sector is constituted by a conservative, notorious group of employers who have been hell-belt on undermining the hard won gains of workers."

A further statement made by NUMSA is that "These are the same employers who wanted to collapse the MEIBC council by refusing to pay levies, which they still owe!" Directly contrary to this statement, PCASA employers have been paying these levies from the date on which it became due to date of publishing of this press release. The statement made by NUMSA is thus false in its totality. For the purpose of clarity, the employers in the Plastic Industry hereby place the following on record:

In light of the above it can be seen that there is no 'down-varying' of workers' wages, benefits and working conditions. A further noteworthy point is the 'demand' made by NUMSA that the provisions of the Main Agreement in the Engineering Sector should be applied in the Plastics Sector. This is a matter of impossibility, as NUMSA themselves have agreed that the Plastics Sector should be expressly excluded from the Main Agreement. Further, negotiations have already been concluded in the Engineering Sector and the agreement has been submitted to the Minister of Labour for extension to non-parties expressly excluding the Plastic Sector.

From the above the following should be highlighted:

Over and above the points already raised, the PCASA has already, in 2016, presented NUMSA with a draft Consolidated 2016-2021 Plastic Industry Main Agreement, which is strongly believed to have not been shared with their members. Should it have been shared, their members would have been well aware of the above facts. It seems however that NUMSA elected not to inform their members of this as it would reveal the fact that NUMSA themselves have been aware of the true facts, notwithstanding them misleading their members regarding the correct position. The exploitation by NUMSA of their members will become evident in due course. In the meantime, a court challenge is scheduled to be heard in the Labour Court tomorrow. All documents as referred to herein are available upon request.